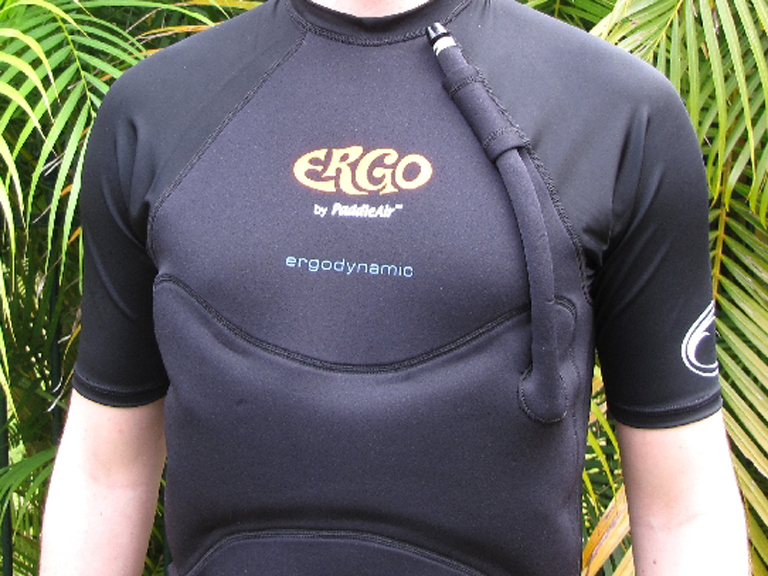 Surfers have long realized that prone paddling to catch the next wave is hard work. It strains the back, shoulders, ribs.  Muscles get weak and sore.  It can get painful and curtail a great surfing session and ruin your surf vacation.

Since 2004, Dave Hilts, founder of PaddleAir, Inc. has invented the solutions to solve these problems.  First, with the PaddleAir Insider and Outsider and today with the Ergo by PaddleAir, which comes in a variety of styles.

With an Ergo, surfers can indeed “Paddle Stronger and Surf Longer.”  But the evidence of this is not just empirical, it has now been scientifically tested. (Read: Surfers Get the Scientific Data Treatment at CSUSM) The original research results have been formally published in The Journal of Applied Biomechanics (Volume 44, Issue 4, August 2017):

Low back pain is a commonly reported problem among recreational surfers. Some individuals report that wearing a vest with an inflatable bladder that alters trunk angle may help to alleviate pain. The purpose of this study was to determine whether such a vest has an effect on muscle activation and extension of the lower back. Twelve recreational surfers completed 12 paddling trials at 1.1 m/s in a swim flume on both a shortboard and a longboard on two separate days. Three conditions of no vest, vest uninflated, and vest inflated were presented to participants in random order. Surface EMG and trunk angle were acquired via wireless sensors placed over the right erector spinae, mid-trapezius, upper trapezius, and latissimus dorsi. Wearing the inflated vest affected muscle activation: erector spinae and mid-trapezius demonstrated a significant decrease in activation relative to wearing no vest (12 and 18% respectively, p<0.05). Trunk extension was also significantly reduced when the vest was inflated (18% reduction, p<0.05). Results were similar for both the short and longboard, though this effect was greater while paddling the larger board. These results suggest that a properly inflated vest can alter trunk extension and muscle activity while paddling a surfboard in water.

Below is the graphic illustrating the results:

You can also view the original PowerPoint slide here.